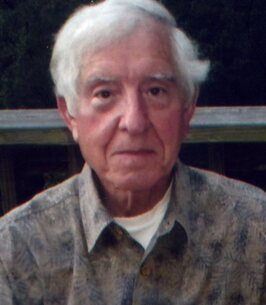 Floyd Hoffman Criswell, 91, of Merry Point passed away peacefully on Feb. 26, 2022 in Hanover Rehabilitation Center where he was preparing to return home in a week. He was born on Nov. 17, 1930 to the late Rogan and Milton Criswell in Harrison County, Kentucky, where Floyd’s childhood and youth were spent.

A veteran of the Korean War, he served in both Japan and Korea where he worked on F-86 Sabre fighter planes.

His career began with the Mercury and Gemini space programs in the early 1960s and took him to such locations as Wallops Island, VA, Cape Canaveral, FL, and California’s Vandenberg Air Force Base, recently renamed the Space Force Base.

Floyd Criswell received the honorable title of Kentucky Colonel, which was bestowed by Kentucky Governor Andy Beshear as acknowledgement for noteworthy accomplishments and outstanding
service to community, state and nation.

Having played basketball in high school, Floyd was a lifelong fan of the sport with season tickets to Stanford University games during the decades when he lived near the Palo Alto, California campus. During his retirement years in the Northern Neck, he began to follow the University of Richmond and other Virginia teams.

A native of Kentucky, he loved the Bluegrass State, but during his 20-year retirement he was devoted to the Northern Neck where he became familiar with the rivers, creeks, and tides, the people and events such as Music by the River at Belle Isle State Park notably when music was Bluegrass. Because the history of the region fascinated Floyd, he joined the Lancaster Virginia Historical Society and the Virginia Aeronautical Historical Society. He especially enjoyed attending the monthly meetings of the latter. He particularly appreciated the fact that in the Kilmarnock town parking lot, there is a parking space reserved for veterans only.

Floyd Criswell was predeceased by his sister Marjorie Criswell Marsh.

He is survived by his wife of 61 years Ann Lee Dunaway Criswell and by his brother Dale Criswell of Lexington, KY. He is also survived by three nephews and three nieces and their children as well as numerous cousins.

A celebration of the life of Floyd Criswell will be held 2:00 p. m. Saturday, March 12, 2022 at Historic White Marsh Church and Cemetery. The family will receive visitors beginning one hour prior.

In lieu of flowers memorial donations may be sent to the Lancaster County Community Library, PO Box 850, Kilmarnock, VA 22482 or to the Animal Welfare League, PO Box 975, White Stone, VA 22578 or to a charity of the donor’s choice.

Currie Funeral Home LLC of Kilmarnock is handling the arrangements.