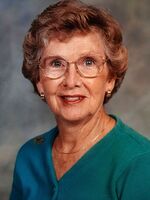 Maxine Dize Somervell of White Stone, VA, passed peacefully from this world early on December 9th after a long battle with Parkinson’s Disease. Born Viola Maxine Dize in Palmer, VA, on February 15th, 1933, and raised on Pretence Creek in Northumberland County, VA, she graduated from the Medical College of Virginia in 1954 with a Bachelor of Science in Medical Technology.
She married Charles Edwin Somervell of White Stone, VA, in 1954 at the Bluff Point United Methodist Church in Byrdton, VA. They raised three boys, mostly in West Point, VA, where they lived for many years. Scouting was a passion for her. She served as “Den Mother” for all three boys, trained others to do the same, and spearheaded fund-raising events for the Rappahannock River District, earning the District Award of Merit for her service. She enjoyed arts and crafts, playing bridge with friends, and music. She sang in church choirs for many years wherever they were living. She was especially devoted to the White Stone United Methodist Church, where she served on nearly every committee and chaired most. She enjoyed working in the kitchen, organizing Lenten Lunches, and singing in the church choir. She was also very much involved in the United Methodist Woman’s Club and was instrumental in building the Thrift Store next to the church and working on their Scholarship Committee.
She was preceded in death by her parents, Captain Jesse Poole (J.P.) Dize and Agusta Henderson Dize, her brother Dane Merrick Dize, her husband of 35 years Charles Edwin Somervell, and her dear friend and companion David John Haurand.
She is survived by her brother Jesse Henderson Dize of Kilmarnock, VA, sister Ellen-Brent Boone of Morehead City, NC, sister-in-law Betty Jane Taliferro of White Stone, VA, and her three sons: Douglas Poole Somervell of White Stone, Charles Edwin Somervell Jr of Gloucester, VA, Alan Dize Somervell of Brennen, WA, and 6 grandchildren that she adored very much.
A small private ceremony was held at the White Stone United Methodist Church last Saturday and may be viewed on the church's Facebook Page. A Celebration of a life well-lived will be scheduled sometime in the future when it is again safe to gather together and sing!
She would be most appreciative, if you are so moved, for donations in her name to the Michael J Fox Foundation for research into Parkinson’s Disease: 1-800-708-7644, Donation Processing The Michael J. Fox Foundation, P.O. Box 5014, Hagerstown, MD 21741-5014 https://www.michaeljfox.org/donate
Or the White Stone United Methodist Church Women’s Club Scholarship Fund. (804) 435-3555 118 Methodist Church Rd., White Stone, VA 22578