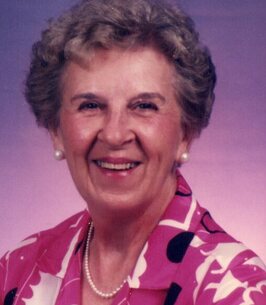 On Mother's Day, May 8, 2022 the Lord called home his loyal servant, Ruby Benson Abbott. Ruby was the daughter of William and Rebecca Benson. She was predeceased by her parents, her husband Walter Abbott, her brothers Wesley, William, Charlie and Raymond Benson and sisters, Alma Benson, Margaret Benson and Etta Benson McNeal and her special friend of twenty-seven years, Homer “Hap” Jones.
Ruby was an instructional aide in the Lancaster County School System for many years and found great joy when one of her students would speak to her many years after she retired. Having grown up in Irvington and Kilmarnock during the depression, she was always able to share stories about her youth, the people she knew and the way of life during very difficult times. She maintained an encyclopedic knowledge of Kilmarnock, even being able to describe the interiors of the oldest homes in town.
Ruby was affectionately known as Miss Ruby to her friends, and she will be greatly missed by all who knew and loved her. She is survived by her four sons, Walter Jr. (Shelby), Allan (Peggy Jo), Gerald (Debbie) and Richard (Jan); her cherished grandchildren Christa (Ward) Davis, Jamie (Angela), Travis (Kylie), John, Alex, Jordan, Joshua, and Jessica (Shayne) Kersey; also, great grandchildren Hunter and Catherine Davis, Lane and Walter Abbott, Jameson Pope, Aubrey and Addyson Kersey, and many beloved nieces and nephews. Miss Ruby was a faithful member of Kilmarnock Baptist Church for seventy-nine years.
The funeral service will be at Kilmarnock Baptist Church on May11, 2022 at 2:00 p. m.. Burial will follow at Woodlawn Cemetery. Family will receive friends one hour prior to the service at the church.
In lieu of flowers, donations may be made to St Jude's Children Research Hospital, P. O, Box 50, St Jude Place, Memphis, TN 38101-9925.