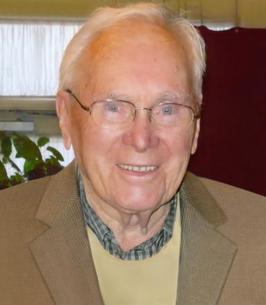 We mournfully, announce the passing of Thomas E. Wilhelmsen, 101, of Irvington, Virginia. Tom passed away on April 12, after a vigilant battle with prostate cancer.

Tom was born on January 30th, 1921 to Peder and Johanna Wilhelmsen in Skudenshaven, Norway. The family immigrated to the United States when Tom was 4 years old. Besides his parents, brothers Harry and Jens are predeceased.

Tom graduated from the United States Maritime Academy, New London, Connecticut. He served in the Pacific Ocean during World War ll. After the war he worked as a Chief Engineer and as a Port Engineer for a long and successful career with the United States Lines.


In 1948, he married Norma Thorstensen going on to have a daughter and son-Tom, Jr. and Anne Marie. Tom, Jr. is married to Karen Holden. Tom and Norma celebrated 60 years of marriage prior to her death. Their daughter Anne Marie passed away in 2017.

An assignment at Newport News Shipyard led to Tom learning about the Northern Neck. He built a home in Kilmarnock that he lived in for 40 years before moving to Rappahanock Westminister Canterbury, Irvington.

In retirement, Tom followed his passion for golf at the Indian Creek Yacht and Country Club. Most golfers only dream of shooting their age. Tom first did it when he was 76 and repeated it more than 15 times. He had his last hole-in-one at age 86. He shot a 91 at age 95 on opening day of the club in 2016. His last golf round was at age 98.

Tom was a very proud grandfather to Sara and Erik Wilhelmsen. Their spouses are Dave Viale and Sarah Pindell. He has 5 great grandchildren - Severin Wilhelmsen, Sonya Wilhelmsen, Anelise Viale and identical twin boys Luca Viale and Willem Viale. He also has had 18 nieces and nephews.

Tom met his beloved companion, Claudia Holmes, at the Living Water Lutheran Church in 2009. They shared many common interests and brought much joy to each other.

Funeral services will be held 11:00 a. m. Tuesday, April 19, 2022 at Campbell Memorial Presbyterian Church. Interment will be in Historic Christ Church burying ground, Irvington. Friends may call one hour prior to the service at the church.