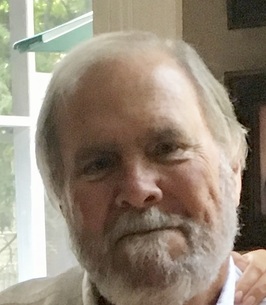 Bill was born to Wilbur and Margaret Mitchell on December 14, 1948 and grew up on The Lane in Irvington. He graduated from Lancaster High School, attended Bluefield College and later Smithdeal Massey Business School in Richmond. He returned to the area and spent an incredible 10 years living at Wharton Grove with his best friend Howard. The awesome stories of that era live on with the group of friends who were frequent visitors to their cottage and known as the Wharton Grove gang.

Bill worked at several businesses locally (The Tides Inn, Standard Products and Lamberth’s, and Weather or Naut) and began making and painting signs part-time in 1977 before settling full-time into his own custom sign business, Mitchell’s Signs, in the little shop we lovingly refer to as the “sign factory” in Irvington. He was committed to his livelihood and sometimes worked seven days a week, especially if a project was challenging and bringing him joy. His custom designed signs can be seen on many businesses and at the end of many driveways locally. He was a perfectionist and an incredible artist who took pride in each and every creation he made for his customers.

Bill lived a good life and through his life touched many people. He was a friend to all and a stranger to no one. He could strike up a conversation with anyone and his sense of humor was quite evident. His stature could be intimidating but he was a gentle man underneath. If he gave his word, he lived up to it, If he made a promise, he kept it. He was dependable. He was a good father and brought up two fine sons to mirror the life he led and carry on the traits of fairness, kindness, generosity and strength. We were fortunate to call him husband, father, brother, uncle and friend and we were blessed to share this life with him. He will be missed.

Visitation will be held Saturday, February 12, 2022 at the Currie Funeral Home from 5:00 - 7:00 p.m. Funeral services will take place Sunday, February 13, 2022 at 12:30 at Grace Episcopal Church in Kilmarnock, Virginia. Bill wanted his ashes placed in Sam’s Cove where he grew up in Irvington and where he spent his childhood. This will take place later in the spring when the trees bud and flowers bloom.