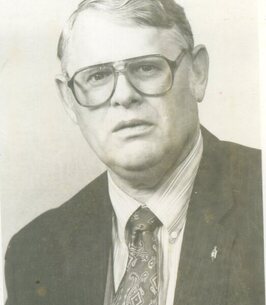 Willmore (Will) Mastin Dameron III, lifelong salesperson and volunteer, died Monday, June 20, 2022, at his home in Glen Allen, Virginia. He was 82 years old.
Someone who never met a stranger as he could strike up a conversation anywhere and anytime, Will was born in 1939 in Charlottesville, to parents Willmore and Hazel Dameron. His childhood days were spent playing in the country near the river house where he grew up in the Northern Neck with his two brothers, Charles and Jimmy who preceded him.
While studying at Virginia Commonwealth University, he met his future wife Susan Dameron and married in 1963. Will started his sales career going door to door selling Wear Ever cookware, before landing in insurance with Woodmen of the World. He continued his passion for meeting people and love of driving across the state after retiring by helping people enroll in Medicare insurance supplements. It was during his stint with Woodmen that his volunteer time was devoted to summer camps. Will loved genealogy and family reunions, devoting much attention to the Dameron-Damron Family Association.
Will is survived by loving wife, Susan, and his children Willmore Mastin Dameron IV and Deanna Weiss as well as their spouses Laurie Dameron and Val Weiss. His son Will introduced him to hunting, and both shared their love of fishing on the Great Wicomico River and the Chesapeake Bay. Five grandchildren were his pride: Tino Weiss, Chris Weiss, Spencer Weiss, Madison Dameron, and Ryan Dameron. He was thrilled to see their college and high school graduations, a new generation of hunter / fisher, and the wedding of Tino to Jessica Weiss.
In place of flowers, the family requests donations be made to maintain the Mila Community Cemetery c/o E.A. Sisson, 86 Salt Water Ln, Heathsville VA 22473.
Funeral services will be held 3:00 p. m. Sunday, June 26, 2022 at Currie Funeral Home, Kilmarnock and the graveside service will follow at Mila Community Cemetery. Family will receive friends one hour prior to the service.